On Sunday, we set out for New City Presbyterian Church in Kampala, where I was scheduled to preach. This morning our driver was John Wiltbank, one of the missionaries at ABU. John and his wife Ally have been at ABU for eight years, where he teaches education courses and she is a nurse and a wonderful self-taught gardener for ABU. John mastered the street traffic like a native Ugandan, which reminded me about how many different skill sets missionaries must manage in order to live daily in foreign lands. I expect that John knew he would have the challenges of teaching, but I wonder if he knew the myriad of skills he would have to exercise in his work for the Kingdom. I had listened to him previously tell me of all the medical services that Ally had provided at ABU. It made me glad that I don't have to worry about such things in the U.S., but gladder still that faithful missionaries like John and Ally are willing to dedicate their lives to helping others.

When we arrived at New City, I was introduced to people in the congregation, including the leaders. I met 3 of the 4 elders (the other is Mike Ennis of Rafiki, who was out of town picking up some children who were going to be newly living at Rafiki) - Bob, Kennedy, and Simon. Bob recently earned his doctorate and was a joyful man in glasses with a beaming smile. 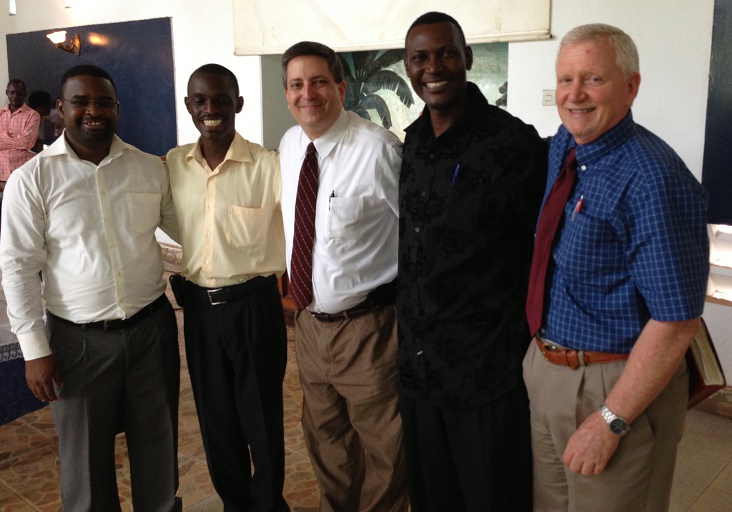 Bob played the keyboard accompaniment for our singing, and did a wonderful job. Kennedy is a slender younger man who is involved in business. Please pray for him, as his desire to follow Christ and to be honest in all his business dealings has made it difficult for him to prosper in a country that is besieged by as much corruption as Uganda is. His wife Vicki was holding their little girl (pictures when I get back!), who was adorable. I told Vicki that her daughter had a very important job - one that I have given to the youngest children in our congregation - the job of being cute! Simon is a tall, encouraging man who delights to be with God's people. He came up to me after the service and thanked me profusely for preaching. All in all I was encouraged and blessed to see how the Lord has provided for His church with fine elders from among the people. (Picture from left to right: Bob, Kennedy, me, Simon, Tim)

The worship service at New City was remarkably like that of Christ Church. Some of the music was different, but it was God-honoring and the people sang enthusiastically. We had many of the same elements of worship: Affirmation of Faith (Heidelberg Catechism #1), Corporate and Private Confessions of Sin, reading of Scripture, preaching of the Word, and the Lord's Supper. It was a joy to preach to them from Genesis 36, "Isaac's Other Son," the text I had preached the week before in Katy.

After dinner we headed to Bruce and Pam Sinclair's home for lunch. The Sinclairs are PCA missionaries in Kampala; Bruce teaches at Westminster Theological College. We enjoyed food and fellowship, and looked out over Lake Victoria - a spectacular sight! It was encouraging to hear how the Lord brought the Sinclairs to Uganda, in that each of them at different times felt the calling of the Lord to missions, and they went when the time was right.

It was a great Lord's Day, and I was so grateful to be with God's people. It further solidified in my mind that no matter where you are, no matter how busy you think you are, there is no substitute for corporate worship of the Triune God with His people. I would greatly encourage you to make that blessing a priority in your own life each week.

Thanks, Cheri! I have made the correction.

Fred, we are so glad you are here! What a blessing your teaching has been thus far! A correction on the above blog: The parents of the darling baby are Kennedy and Vicky, although Bob's wife may have been holding her at the time.

Hi Fred. Just now able to catch up on your news from Uganda. We are praying for you and so happy to hear the blessings you are receiving from the Lord in a place so far from home.