Day two of my Uganda trip has officially arrived in all three time zones that I am in today (Houston, London, and Kampala). I have not yet officially arrived at my destination yet - I'm writing from 30,000 feet above Africa and will upload this when I land - but it has been a very good trip so far. Some of you may already know that I had a difficult time getting checked into my flight; a few of you may know that I can struggle with patience when such things happen. In the end, I was able to check in at the airport, and the flights themselves have been excellent.

The 777 (what a wonderful plane!) that I was on to London was only about 2/3 full, which made for very easy seating and sleeping. My boys would be jealous of the entertainment system I had: games (did not play), music (listened to some Vivaldi), and movies (I watched one). The food was also outstanding. I had a very good conversation with a gentleman in the Houston airport who was in Houston on business. He was born in Madras, India, and moved to the UK when he was 11. His uncle and aunt were (and are) Christian Brethren missionaries in Madras. He described being in church as a boy, and not really understanding it all, but now he appreciates it. He also mentioned (LISTEN now, young people) that he had made great friends in the Church, and that they were among his best friends now. I could not help but think about how the Lord blesses us even in small ways we do not expect - him, with friends and a unique (for India) Christian upbringing; me, with some ease in my journey, and the opportunity both to see so many different types of people (all of whom need Jesus) and also to talk with a brother in Christ.

I received good advice for the trip: to try and sleep on the first leg to London, and then stay awake on the way to Entebbe, because I will arrive at 11:30pm local time. The Lord provided good sleep with the help of sound canceling headphones and an eye mask, and I slept about 4 1/2 hours. We landed in London around 8am local time, and I was able to go to a quiet and empty restroom to shave, brush my teeth and freshen up. It was a small Providence, but a welcome blessing. I then road a nearly empty tram to the flight connection area, and then on to the security line. God had given me the blessing of an unrushed, uncrowded transition in the airport. I was in such a good frame of mind - excited to be on my way to ABU - that I did not even mind when they chose my luggage to open and search. The security at Heathrow did that to numerous travelers. Because I had a long layover (4 hours) I was not stressed and was able to talk to several other travelers from India, the UK, and Scandinavia. Then it was on to the gate area, and a touch of home, a Starbucks coffee. I was able to get an internet connection for a few pounds for the month (which will serve the trip home also), and so I was able to video chat with Deb via Skype. (YES, she was awake at 5am Houston time to talk to me!!)

The leg to Uganda was also delightful. I was able to get some work done, listen to some music, and I watched a few episodes of the new Sherlock Holmes drama, Elementary. In a hour, I'll be (Lord willing) in Entebbe airport, ready to see the Hokes, and then get some sleep. I think I may even be able to get on Uganda time sooner rather than later. Tomorrow the REAL adventure begins. 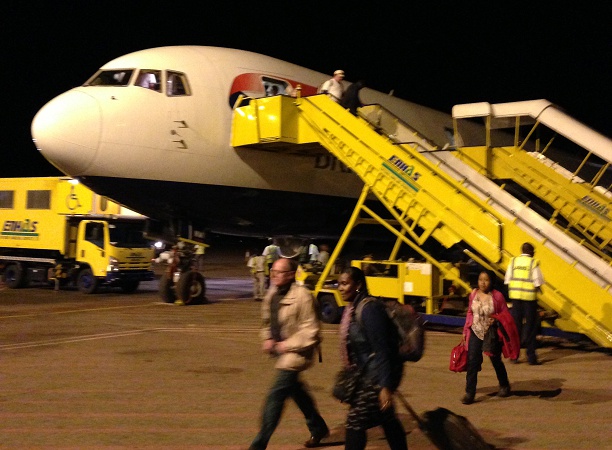 What a great update! We are truly blessed. Our Lord knows our strength and weakness using both to His glory.

From cold, snowy Paris, we send you greetings! We are praying for you and for your trip. We heard from our friend Ken Chapman and he is hoping y'all will connect.

What a joy it will be to hear all about your time in Uganda.

Dave and Nancy and grandsons David and William